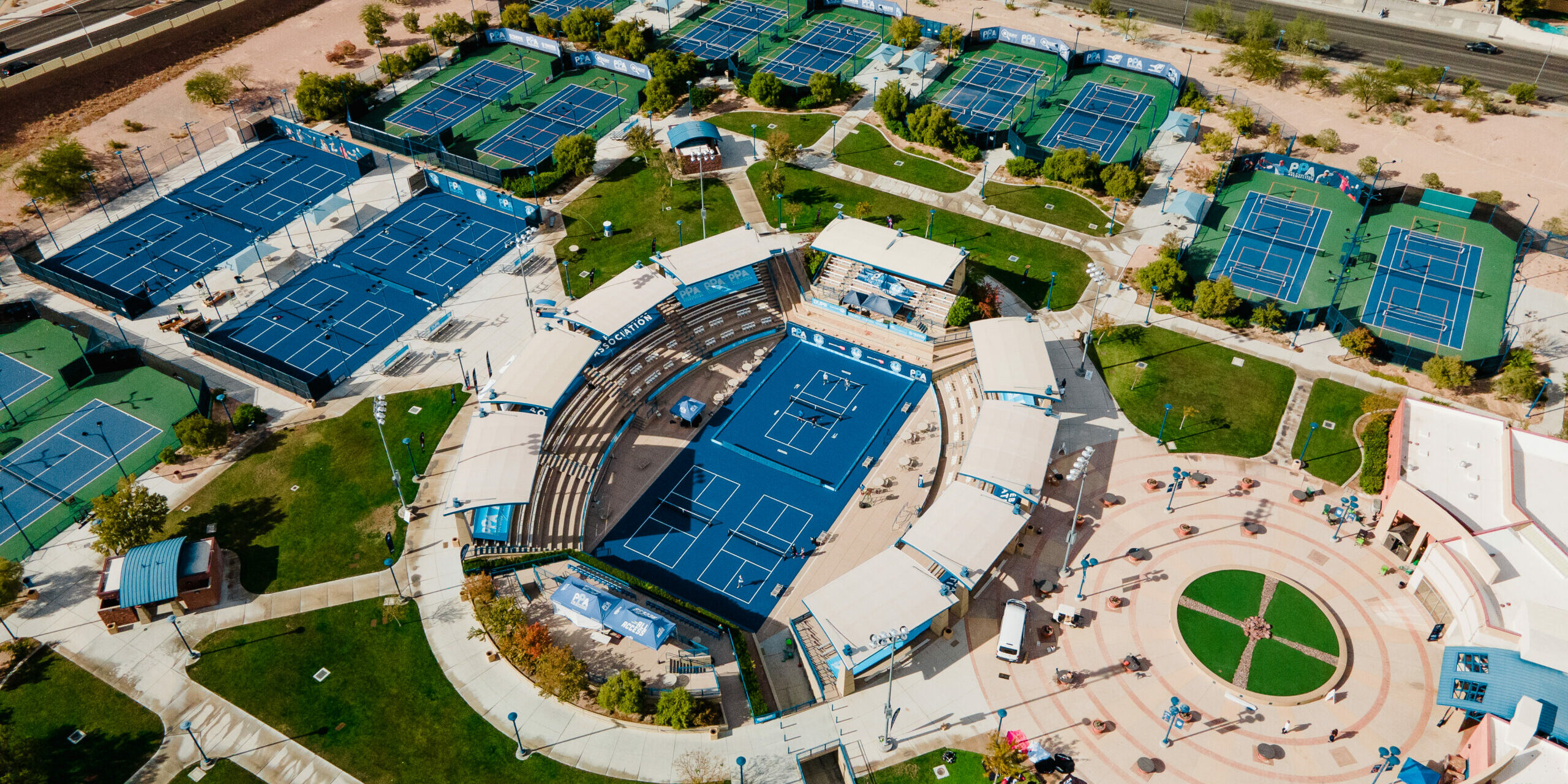 Las Vegas plays host to the biggest Grand Slam of the year this week, and fans should expect the PPA superstars to put on a show. Last year’s PPA Championships delivered plenty of nail-biting and invigorating matches, so we should see more of the same over the next four days.

Jessie Irvine and Jay Devilliers stirred up more drama in mixed doubles than anyone else in Vegas last year. The pair had to come back from behind in the quarterfinals and finals after losing the first game in both matches 11-13. In the championship match, they actually lost the first two sets and somehow managed to pull off a miraculous comeback to capture the title!

Well, get your popcorn ready, because Irvine and Devilliers are teaming up once again to defend their title. This year, Irvine and Devilliers will have to overcome some new and formidable opponents. Ben Johns and Anna Leigh Waters just became the top two mixed doubles players in the PPA rankings, and they have absolutely dominated the mixed division over the last couple months. Their ability to consistently stay in long points and find openings in the court has improved so much, that winning just one game against this powerful duo has become an accomplishment! The only team to win a game against them in the most recent tournament, the Peachtree Classic, was Catherine Parenteau and Riley Newman. Newman reached the mixed doubles final of last year’s PPA Championships with his sister Lindsey, and he has played some of the best doubles of his career in 2022. Expect fireworks if any two of these three teams go head-to-head.

Tyson McGuffin and Riley Newman kept fans on the edge of their seats at the 2021 PPA Championships with three consecutive neck-and-neck battles! It was a photo-finish in their quarterfinal, which they won by a remarkable score of 12-10, 12-10 in the semifinal against Jay Devilliers and Patrick Smith. Although McGuffin and Newman fell just short in a five-game final, viewers will not soon forget their thrilling run.

McGuffin and Newman could definitely be involved in more phenomenal matches this year, but not as partners. Newman, currently ranked No. 3 in men’s doubles, returns to Vegas with Matt Wright by his side. Expect Newman/Wright to have at least one match that goes the distance, especially if they meet up with the sibling team of Ben and Collin Johns. Team Johns and Newman/Wright have a rivalry brewing this year, and all of their hair-raising matchups feature plenty of rapid-fire exchanges at the net. McGuffin makes his return to Vegas with Jay Devilliers – a partnership that tends to get involved in close matches as well. And don’t forget about J.W. Johnson, who sent shockwaves through the brackets he competed in at the Peachtree classic. Prepare for some electrifying pickleball from him and his partner, Dekel Bar, who is last year’s PPA Championships’ defending champ in men’s doubles. Bar took the title alongside partner Adam Stone.

Jessie Irvine was also involved in some nerve-racking matchups in women’s doubles with partner Catherine Parenteau at last year’s championships. After making a exciting comeback in the semis, Irvine/Parenteau sealed the deal in an unforgettable final against Anna Leigh Waters and her mother, Leigh Waters. It felt like a chess match as both teams strung together a plethora of cat-and-mouse points.

If the mother-daughter combo is going to go all the way this year, they’ll need to dig deep. Team Waters has won a couple of gold medals recently, but Jessie Irvine and Anna Bright beat them in Cincinnati and pushed the Waters duo to five games at the Peachtree Classic. Top-seeded team Lucy Kovalova/Callie Smith also kept pace with Waters/Waters at the Tournament of Champions. Kovalova/Smith are playing together in Vegas, but Irvine and Bright have new partners this week. Irvine, who is now the No. 1 women’s doubles player, teams up with Lindsey Newman. Bright will form an interesting new partnership with Parris Todd, who made a Cinderella story gold medal run in singles at the Select Medical Cup in June. Third-seeded Catherine Parenteau and Lea Jansen are a dangerous underdog team that could create even more drama in the women’s doubles bracket on Saturday.

J.W. Johnson’s emergence was felt in Vegas last year. At just 19 years of age, Johnson pulled off a monumental upset over second-seeded Jay Devilliers. The up-and-comer followed that up with a world-class performance against Tyson McGuffin. Despite losing to McGuffin in a duel that came down to the wire, Johnson raised plenty of eyebrows at the 2021 PPA Championships.

Johnson will likely get involved in multiple exhilarating matches in Vegas this year. He had a couple of rousing matches at last month’s Peachtree Classic, and even more entertaining contenders will take part in the Guaranteed Rate Championships. Dylan Frazier, a finalist in TOC before falling to Ben Johns, is someone to watch, as is Zane Navratil and Federico Staksrud. Other highly-ranked singles players who you can count on for compelling match play are Jay Devilliers, Tyson McGuffin, and Tyler Loong. Hunter Johnson has also made a name for himself recently with some noteworthy runs and wins that include a finalist appearance in Cincinnati.

Although the women’s singles final at last year’s PPA Championships was just three games long, all three games had some exceptional points. Catherine Parenteau and Anna Leigh Waters squared off in the final, and Parenteau prevailed by a score of 11-6, 11-8, 11-7. Each set featured long points with some unbelievable sliding digs from Parenteau, who seemed to be completely in the zone from start to finish.

Waters has since ascended to the top spot in women’s singles, and Parenteau is currently right below her at No. 2. A rematch would be incredibly stimulating, and several other competitors will likely serve up some drama as well. Callie Smith is a player who tends to play at least one nail-biter per tournament, and she took the bronze medal last year in Vegas. Irina Tereschenko played an epic consolation match at last year’s PPA Championships against Lea Jansen, and don’t sleep on Salome Devidze – almost every one of her recent matches have been heart stoppers!

If you’re ready for some suspenseful pickleball matches, be sure to watch the Guaranteed Rate PPA Championships on Tennis Channel and PPA TV! For more details, check out our TV Guide.